What is PGT and PGT-M?

Pre-implantation Genetic Testing (PGT), previously known as Pre-implantation Genetic Diagnosis (PGD), is a technique used alongside IVF by couples who have a particular inherited condition to avoid passing it on to their children. Pre-implantation Genetic Testing for Monogenic / Single Gene Disorders (PGT-M) is used when either one or both partners is / are known to have an abnormal gene. The technique allows embryos created through IVF to be tested in order to find out if they have inherited the abnormal gene so that an unaffected embryo can be transferred to the womb and hopefully will result in the birth of an unaffected baby.

What is a single gene disorder?

Healthy people typically have 23 pairs of chromosomes: Chromosomes 1 to 22 are called autosomes, Chromosome 23 is called the sex chromosome, and this pair determines if you are a female (XX) or a male (XY). A gene is the basic unit of genetic information. Genes are distributed over the 23 pairs of chromosomes and therefore they also appear in pairs. Every gene has a different function, and controls different biological activities. When there is a change in a gene called a mutation happens, the gene cannot function normally. The disease caused by the mutated gene is known as a single gene disorder. A mutated gene can be located on any autosome when it is described as autosomal, or on the sex chromosome when it is described as X-linked or Y-linked depending on which chromosome it is located on. Mutated genes can be passed on to the next generation. Based on the way these diseases are inherited, they can be classified as Autosomal Dominant Disorders, Autosomal Recessive Disorders, X-linked Dominant Disorders, X-linked Recessive Disorders and Y-linked Disorders.


An Autosomal Dominant Disorder is when the disease is caused by a mutated dominant gene on an autosome. Only one mutated copy of the gene inherited from either the mother or the father will be necessary for a person to be affected by the disease. Each affected person usually has one affected parent who also has the disease. The affected person will have a 50% chance of having an affected child with each pregnancy.

An Autosomal Recessive Disorder is when the disease is caused by a mutated recessive gene on an autosome. Two copies of the same mutated gene must be present for a person to be affected by the disease, one copy inherited from the mother and the other copy from the father. Parents of an affected person may not have the disease, but they each carry a single copy of the mutated gene and are referred to as carriers. Carriers normally do not have symptoms. Two carriers who each carry one copy of the mutated gene will have a 25% chance with each pregnancy of having a child affected by the disease, and a 50% chance of having a carrier child. 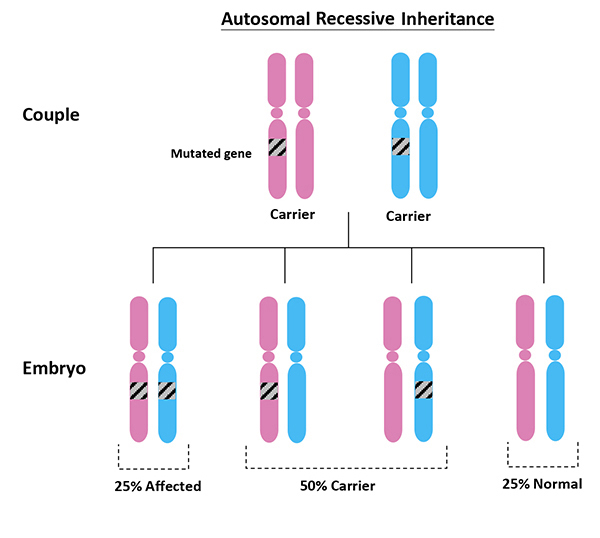 An X-linked Dominant Disorder is when the disease is caused by a mutated dominant gene on the X chromosome. Men and women are both affected by these disorders, but the chance of passing on the disorder to the next generation differs between men and women. The sons of a man with an X-linked dominant disorder will all be unaffected, since they receive their father’s Y chromosome, and his daughters will all inherit the condition. A woman with an X-linked dominant disorder has a 50% chance of having an affected child with each pregnancy. 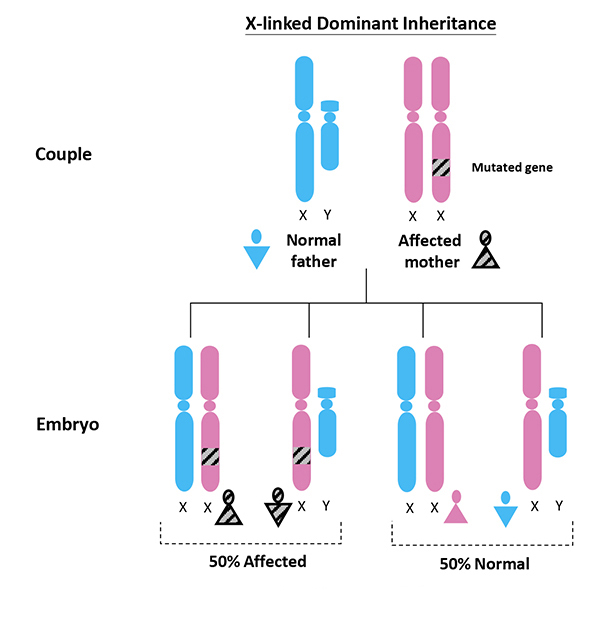 An X-linked Recessive Disorder is when the disease is caused by a mutated recessive gene on the X chromosome. Men are more frequently affected than women, and the chance of passing on the disorder differs between men and women. The sons of a man with an X-linked recessive disorder will not be affected, and his daughters will carry one copy of the mutated gene, called a carrier. A woman who is a carrier of an X-linked recessive disorder has a 50% chance of having sons who are affected and a 50% chance of having daughters who carry one copy of the mutated gene and are therefore carriers. 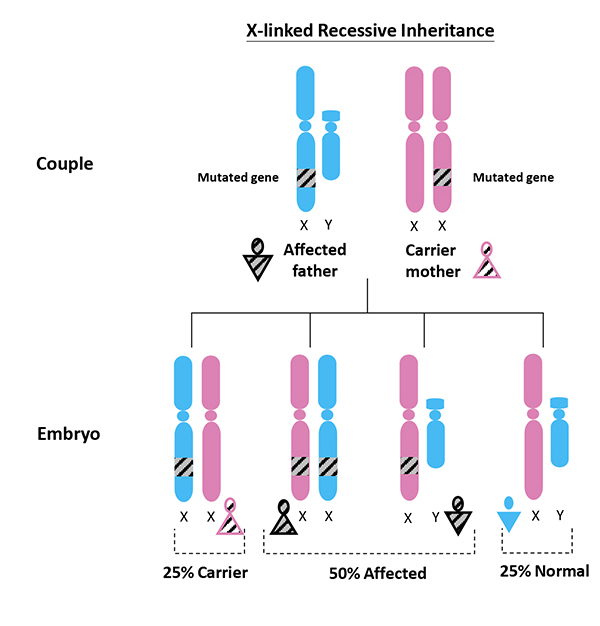 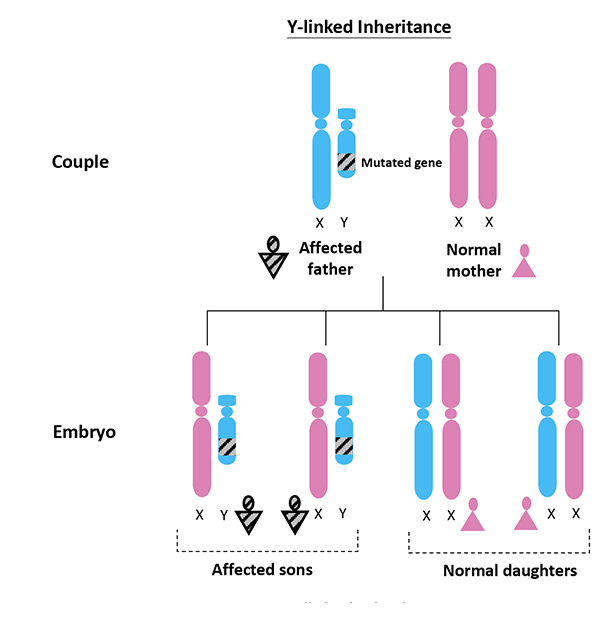 Embryos carrying these mutated genes may grow at a normal rate in their early stages and look like the same as normal embryos. It is therefore possible to select an embryo for transfer that looks normal but actually contains a copy or two copies of the mutated gene. This embryo may implant and grow and eventually give birth to an unhealthy baby affected by this specific genetic disorder. PGT-M can be used to check if an embryo is affected by this specific mutation. PGT-M can also distinguish a normal embryo from an embryo carrying a recessive gene. An embryo with only one copy of the mutated recessive gene is a carrier embryo not affected by the disease and therefore can still be used for transfer. It can grow to become a healthy person. An autosomal recessive gene carrier will have the same problem that his / her parents are now facing when he / she plans to start his / her family AND his / her partner is also a carrier of the same mutated gene.

Who should consider PGT-M?

What does PGT-M involve? 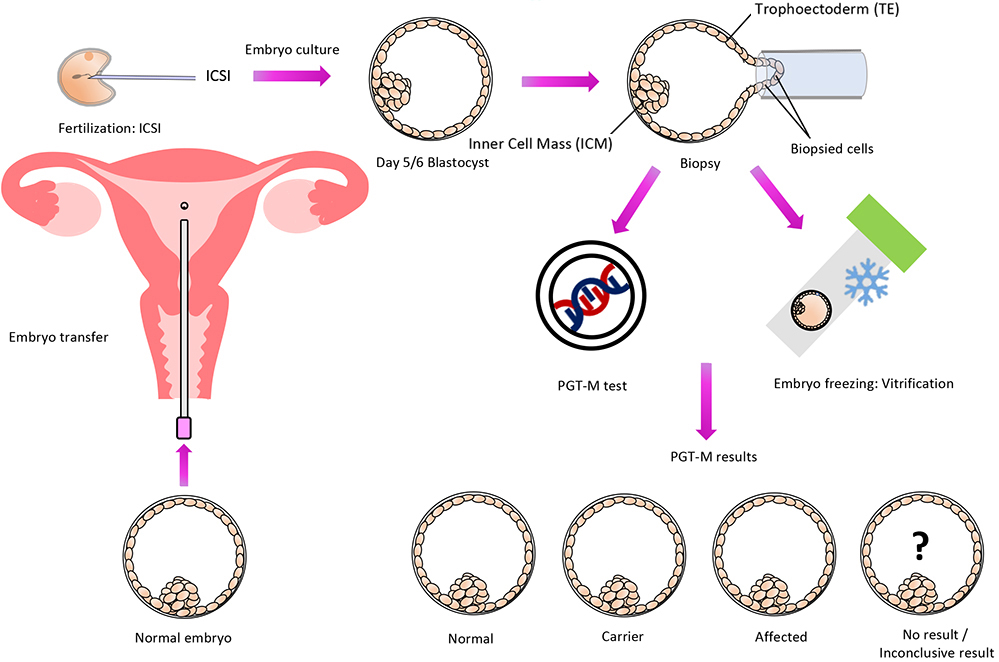 The first step of PGT-M is to go through an IVF treatment cycle. During the IVF cycle, each egg is fertilized with a sperm using intracytoplasmic sperm injection (ICSI) to avoid redundant sperm sticking to the outer sheath of the egg which will interfere with the test result. The embryos are cultured for five days, or sometimes six days, until they become blastocysts.

Those embryos that can grow to become good quality blastocysts are biopsied whereby a few trophoectoderm (TE) cells are removed from the blastocyst. These cells are “extra-embryonic” and will produce tissues such as the placenta. The inner cell mass (ICM) is the group of cells that will become the baby. There are over 100 trophoectoderm cells in a blastocyst so the removal of a few of these cells will have minimal impact on the embryo. Straight after the biopsy procedure the embryos are frozen to await the result of the test. The cells removed by biopsy are analyzed at the PGT laboratory. Frozen-thawed embryo transfer (FET) can be arranged in the following cycle if there are suitable embryos for transfer.

Does a couple who are carriers of a genetic disease have any alternatives to PGT-M?

If the couple does not have fertility problems, they can choose to conceive naturally and then consider prenatal testing by chorionic villous sampling or amniocentesis. For most couples this route actually gives the highest chance of having a healthy baby. However, it does mean that the couple may be faced with the very difficult decision about whether to continue or to terminate an affected pregnancy. Some couples consider other options including use of donor eggs, sperm donation, embryo donation adoption, or not having children.

Can PGT-M exclude all other chromosome or genetic diseases?

PGT- M tests for a specific single gene disorder the couple is carrying. It does NOT screen for other gene mutations. It does NOT test whether the embryo has a correct number of chromosomes. The risk of having an embryo affected by a chromosomal aneuploidy (extra or missing chromosomes) is influenced by the age of the woman. The older the woman is, the higher the chance of having a pregnancy with an incorrect number of chromosomes. An aneuploid embryo will fail to implant mostly, or miscarry in early pregnancy. Occasionally, it may grow to term and may result in a baby with birth defects. Pre-implantation Genetic Testing for Aneuploidies (PGT-A) is a test to check if the embryo has a correct number of chromosomes. It is possible to perform both PGT-SR and PGT-A tests simultaneously with the same biopsied cells.