What are chromosomes and numerical chromosomal abnormalities?

Healthy people typically have 2 sets of chromosomes in each cell (23 in each set, a total of 46), with one set inherited from the mother and the other set from the father. Chromosomes X and Y determine if you are a female (XX) or a male (XY). People with a correct number of chromosomes are described as euploid: a woman has 46,XX chromosomes and a man has 46,XY chromosomes. Recent research has shown that many embryos have an incorrect number of chromosomes in their cells, a condition known as aneuploidy. This can be in the form of missing a chromosome, or having an extra chromosome. These aneuploid embryos may grow at a normal rate in their early stages and look like the same as euploid embryos. It is therefore possible to select an embryo for transfer that looks normal but actually contains faulty chromosome number. Most aneuploid embryos fail to implant in the uterus or miscarry during early pregnancy. Occasionally a pregnancy can reach full term and result in a baby with birth defects e.g. Down Syndrome. A girl with Down Syndrome has 47,XX,+21 chromosomes, whereas a boy with Down Syndrome has 47,XY,+21, an extra chromosome 21.

What is the relationship between chromosomal aneuploidy and a woman’s age?

Aneuploid embryos occur across all women age groups, but after a woman reaches 35, the proportion of aneuploid embryos increases rapidly. For women under 35, about 40% of embryos are aneuploid and the rate increases to >70% for women over the age of 40. This explains largely why older women have a lower IVF success rate and a higher miscarriage rate.

Who should consider PGT-A?

What does PGT-A involve? 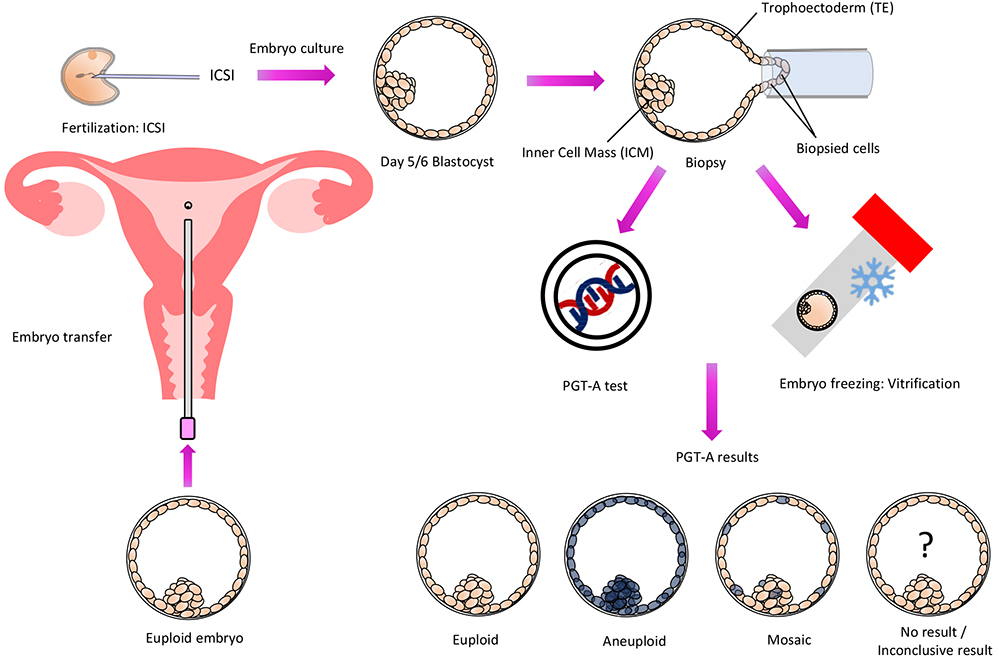 The first step is for the couple to go through an IVF treatment cycle. Each egg is fertilized with a sperm using intracytoplasmic sperm injection (ICSI) to avoid redundant sperm sticking to the outer sheath of the egg which will interfere with the test result. The embryos are cultured for five days, or sometimes six days, until they become blastocysts.

Those embryos that can grow to become good quality blastocysts are biopsied whereby a few trophoectoderm (TE) cells are removed from the blastocyst. These cells are “extra-embryonic” and produce tissues such as the placenta. The inner cell mass (ICM) is the group of cells that will become the baby. There are over 100 trophoectoderm cells in a blastocyst, so the removal of a few of these cells will have minimal impact on the embryo. Straight after the biopsy procedure the embryos are frozen to await the result of the test. The cells removed by biopsy are analyzed at the PGT laboratory. Frozen-thawed embryo transfer (FET) can be arranged in the following cycle if there are suitable embryos for transfer.

How to interpret PGT-A results?

There are four possible results for each embryo tested: euploid, aneuploid, mosaic or no result / inconclusive result.

An euploid embryo contains a correct number of chromosomes, i.e. 46 chromosomes. This embryo will be considered normal and therefore will be selected for transfer. However, PGT-A test may give a false negative result, meaning that the embryo in fact contains an incorrect number of chromosomes. The false negative rate for PGT-A has not been accurately determined. In addition, PGT-A does not test for genetic disorders such as Thalassaemia. Furthermore, the biopsy procedure may damage the embryo and reduce its ability to grow and implant. Therefore, transferring an euploid embryo does not guarantee a pregnancy, nor exclude the possibility of a miscarriage, nor guarantee having a healthy baby.

An aneuploid embryo contains an incorrect number of chromosomes, i.e. not 46 chromosomes. This embryo will be considered as abnormal and therefore will be discarded. However, PGT-A test may give a false positive result, meaning that the embryo in fact contains a correct number of chromosomes. The consequence is that a normal embryo is not transferred when it could have resulted in a healthy baby. Although very unlikely, this indeed has been shown in some study reports. Again, the false positive rate for PGT-A has not been accurately determined.

A mosaic embryo or mosaicism is when an embryo has two or more populations of cells, some contain a correct number of chromosomes and some contain an incorrect number of chromosomes. In the past, these embryos were considered abnormal and were discarded. Until recently, research has shown that transferring these mosaic embryos sometimes can lead to the birth of healthy babies. This happens when the abnormal cells segregate to a part of the pregnancy tissue that is not vital to the development of the embryo and eventually the baby. However, if the abnormal cells are not rendered harmless, the embryo will either fail to implant or miscarry, and in occasions may result in the birth of a child with abnormalities. As such, whether to transfer these mosaic embryos should be very carefully considered with full consideration given to each potential outcome.

A no result / inconclusive result report sometimes happens (<5%). These situations arise because some biopsied cells do not contain any genetic material, or sometimes cells may be lost during the complicated fixation process, or may have suboptimal fixation meaning they cannot be used for analysis. Again, whether to transfer these embryos should be very carefully considered.

Can PGT-A exclude all other chromosome or genetic diseases?

PGT-A only looks at the number of chromosomes in the embryo. It does NOT screen against and CANNOT detect genetic disorders such as Thalassaemia. If either one or both partners carries / carry a specific genetic disorder or chromosomal structural abnormality that could impair the normal development of a child affected by the disorder, the couple should consider Pre-implantation Genetic Testing for Monogenic / Single Gene Disorders (PGT-M) or Pre-implantation Genetic Testing for Chromosomal Structural Rearrangements (PGT-SR).