What is Sperm Freezing?

Who may want to consider sperm freezing?

What does sperm freezing involve?

Men who wish to freeze their sperm have to be tested for infectious diseases including HIV, Syphilis, Hepatitis B and Hepatitis C. This is to ensure that affected sperm samples are stored separately to prevent contamination of other samples.

The man has to produce a fresh sperm sample on the day of planned sperm freezing. The sample is mixed with a special fluid called a cryoprotectant, to protect the sperm from damage during the freezing process. The sample is then divided between a number of containers called cryotubes, so that each cryotube can be thawed independently and the stored sperm can be used in multiple fertility treatments in the future. The cryotubes containing the sperm are then plunged into liquid nitrogen tanks for storage. 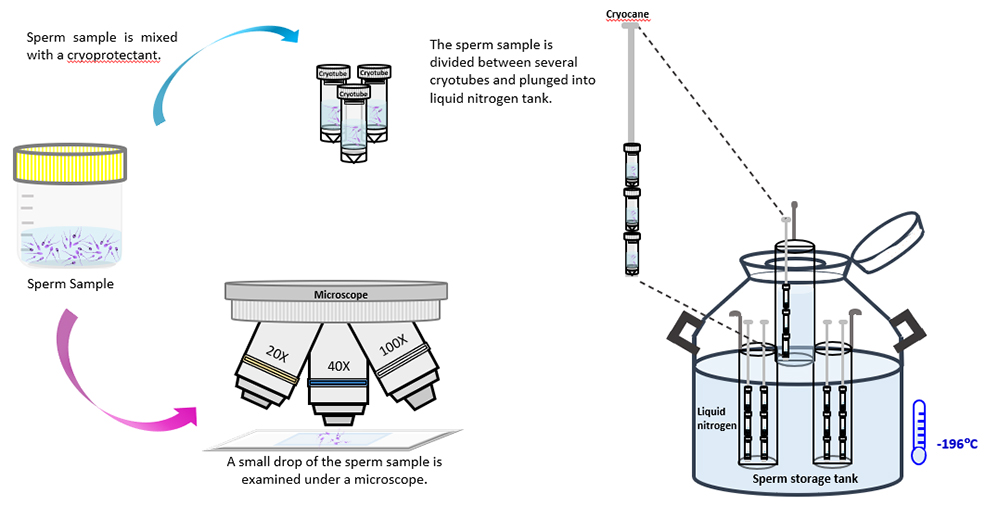 How many sperm samples to freeze?

Sperm may not be able to maintain their viability and mobility during the freezing and thawing processes. In general, around 50% of the sperm can survive after thawing, and the percentage is even lower if the quality of the pre-freeze sample is already not the best.

For men who are freezing the sperm as a backup storage for fertility treatment, one sample is usually adequate.

For men who are freezing the sperm for fertility preservation because of a medical condition, the underlying disease may have caused a reduction in the sperm count and motility. In such situations, it may be advisable to freeze more than one sample if possible, preferably between two to five, depending on the time interval before surgery, chemotherapy or radiotherapy, so that there will be adequate sperm for use in the future after thawing.

What happens when a man wants to use his sperm?

In Hong Kong, when a man wishes to use his frozen sperm for fertility treatment, he must be legally married and infertile.

How long can the sperm be stored for?

Currently if a man is storing sperm for social reasons, the sperm can only remain in storage for up to a maximum of 10 years. Men in certain circumstances such as cancer patients can store their sperm for 10 years or up to when they are 55 years old, whichever is later.